Q:  Mr. Pedometer, am I the only one who repeats the same resolution for each New Year — namely, to lose weight?

A: Nope!  That very well may be the most common item on people’s lists of New Year’s Resolutions. Losing weight seems 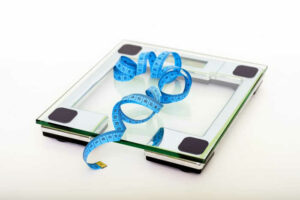 like a more elusive goal as we age.  However, it is an important one.  A recent newspaper article by Sandee LaMotte of CNN gave a dire prediction. It stated that half of Americans will be obese within a decade unless major changes are made.

The prediction is based on an article recently published in the New England Journal of Medicine.  The study analyzed 26 years if Body Mass Index (BMI) data from over 6 million American adults.  The researchers concluded that by 2030, 1 in 4 Americans will have “a body mass index over 35. This means they will be more than 100 pounds overweight.”  That implies huge health and economic repercussions.

“In all 50 states, at least 35% of the population will be obese, the study found.” Hardest hit are 29 states, mostly in the Midwest and South, where the prediction is that 50% of their residents will be considered obese. Sub-populations most at risk for severe obesity include “women, non-Hispanic black adults, and low-income adults who make less than $50,000 per year.”  For adults “with less than $20,000 annual household income, severe obesity will be the most common BMI category in 44 states,” according to lead author Zachary Ward.

How has this happened?  Following are some of the factors:

What can be done to avoid the predictions for obesity?  Here are some ideas shared in the article:

An earlier Harvard study found that “the most cost-effective solution was the tax on sugar-sweetened beverages. The study found the tax saved $30 in health care costs for every dollar spent on the program.”

As you can see from these studies, all Americans need to be aware of the problem of accelerating rates of obesity in our nation.  Perhaps a more reasonable New Year’s Resolution for you would be to avoid gaining any more weight in the coming year.  The ultimate goal is to stay healthy.  And the best ways to do that and to lose weight are….